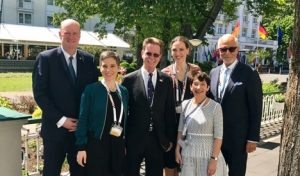 The B20 and L20 presented a joint statement at a G20 labor ministers dinner on May 17 in Bad Neuenahr, Germany which was attended by USCIB Senior Counsel Ronnie Goldberg. Linda Kromjong, IOE’s secretary general and Sharan Burrow, ITUC’s secretary general, jointly presented the statement to the ministers and all B20 and L20 signatories at the handover ceremony  to German Federal Minister of Labor and Social Affairs Andrea Nahles.

This year’s statement builds on the IOE/BIAC and ITUC/TUAC statement from last year with a specific focus on sustainable growth, decent work and social cohesion in the digital economy.

In line with the key priorities of the G20 German presidency, the statement reinforces the important role that business and labor have in shaping policies that not only maximize the opportunities for employment creation, but that also minimize adverse effects on employment and working conditions. Given the special focus on the digital economy, the recommendations in the statement are linked to the impact of technological change on employment and call on governments to grab the chances that technological change presents as well as address its challenges.

To harness the opportunities of technological advancements, it is important that technology is widely diffused so that businesses can maximize the potential of its use. This will facilitate the creation of an agile business environment that can offer growth of income opportunities in all of its forms in the formal economy.

Going forward, the workforce using new technology needs to be well equipped for the new digital age. This requires taking a fresh approach to education, up- and re-skilling and ensuring that all individuals have access to opportunities that allow them to continually upgrade their skills. The B20/L20 joint understanding on key elements of quality apprenticeships, the G20 Skills Strategy as well as the G20 Apprenticeship Initiative clearly have a key role to play in modernizing existing training systems.