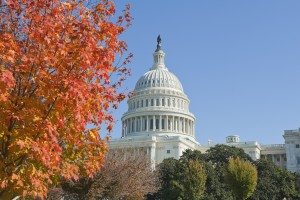 Last week, as the fourth round of talks between the United States, Canada and Mexico on the future of the North American Free Trade Agreement unfolded, USCIB joined many of its members and other associations in flooding Congressional offices on Capitol Hill, raising serious concern over the direction of talks. According to Eva Hampl, USCIB’s director of trade and investment policy, who took part, private-sector representatives spent a full day talking to House Republicans as well as a few Democrats, mainly staff members but also including a few members themselves.

Hampl stated: “The views from House offices varied from understanding the problems presented by statements coming from many U.S. negotiators and administration officials, to having a few specific issues they cared about, to not yet having decided a position on NAFTA modernization. We spent a good amount of time explaining to those who were bogged down in specific issues, or those who did not yet care, that the key elements of the U.S. trading system of the U.S. are at risk.”

Worrisome, and potentially protectionist, proposals coming from the U.S. side in the NAFTA talks address rules of origin, government procurement, investor-state dispute settlement, and a proposed sunset provision that would essentially force NAFTA to be renewed at regular intervals.

“At the same time, a lot of progress is being made in the negotiations in chapters such as customs, digital trade, and in the regulatory space,” Hampl noted. “The U.S. could certainly log a win in this modernization effort if NAFTA 2.0 included those provisions.” But she said there is “great concern” in the business community that NAFTA is being set up to fail with some of the proposals that are being tabled.

USCIB co-sponsored a reception on the sidelines of the NAFTA talks, where Hampl amplified USCIB’s central message of urgency, noting that USCIB members rely on the agreement and its benefits for their operations, which provide jobs for U.S. workers. “NAFTA has done a lot for the U.S. economy and USCIB member companies over the last 23 years, so while this is a great opportunity to bring this agreement into the 21st century, if the existing benefits are lost, that effort will be significantly undermined,” she said.

Another Capitol Hill business lobbying day is planned for October 24. At the conclusion of the fourth round of NAFTA talks, negotiators agreed to defer the next round by at least a month, and to extend negotiations at least through the first quarter of 2018. The next round is slated to begin November 17 in Mexico.