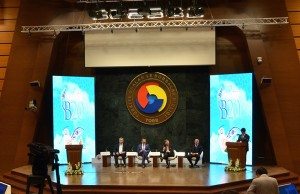 More than 1,400 business leaders and CEOs from 65 countries gathered in Turkey, Ankara for the 2015 Business-20 (B20) Conference from September 3 to 5. The three-day event marked the completion this year’s B20 recommendations and provided an opportunity for the business community to share its priorities with Turkish President Erdoğan ahead of the G20 Leaders’ Summit in Antalya in November. Turkey is the G20 host nation for 2015. Ronnie Goldberg, USCIB’s senior counsel, attended the conference.

During his opening remarks President Erdoğan thanked B20 Turkey Chair Rifat Hisarcıklıoğlu, who also serves on the International Chamber of Commerce (ICC) Executive Board, for hosting an effective B20 process.

“The B20 is the most inclusive of all G20 engagement groups and the regional consultations and events organized by B20 Turkey have made the B20 the most important business platform in the world,” said President Erdoğan. “Turkey will support the B20 recommendations at the G20 Summit in November.”

Rob Mulligan, USCIB’s senior vice president for policy and government affairs, participated directly in meetings of the B20 Trade Taskforce, the recommendations of which are available on the B20 website. At the meetings, Mulligan helped focus the taskforce on 3 recommendations:

Several of USCIB’s member companies had representatives active on the various B20 taskforces.

“Growth and job creation should remain at the top of the G20’s priorities,” said McGraw. “These objectives can be achieved by promoting structural reform within G20 economies; by liberalizing trade and investment; by ensuring well-regulated, growth-enhancing financial markets; and by creating a healthy environment for innovation and new businesses.”

Addressing the G20’s past performance and growing demands for global governance, Wallenberg suggested that the G20 focus its attention on implementation of previously agreed reforms and commitments before introducing new areas of work. To illustrate his point Mr Wallenberg highlighted the ICC G20 Business Scorecard as a tool to monitor the G20’s performance on implementing B20 recommendations.

A highlight of the B20 Conference was the official introduction of the World SME Forum (WSF) as a mechanism for implementing the many SME recommendations developed under B20 Turkey. The WSF is a new global platform co-founded by ICC and the Union of Chambers and Commodity Exchanges of Turkey (TOBB) to amplify the voice of SMEs and unlock their potential to stabilize the economy and stimulate economic growth, trade and employment.

“Never before has the B20 taken such a robust approach to correcting the imbalances in the SME sector”, said Mr Danilovich during a special plenary session on the WSF. “I would like to thank the Turkish government and B20 Turkey for championing economic inclusiveness and support to the SME sector as key priorities in 2015.”

With over 21 panel sessions and 123 speakers, the Ankara conference was the largest business gathering in the B20’s 6-year history.

This entry was posted in Growth, Jobs and Open Markets, ICC, News Stories and tagged Trade and Investment.
Modified on November 20, 2015
Posted on September 11, 2015