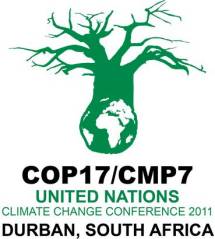 USCIB and its partner business groups are actively pushing for progress at the UN climate conference now underway in Durban, South Africa.  But governments are hamstrung by precedent-setting decisions taken two decades ago.

A number of USCIB member company representatives, as well as Norine Kennedy, USCIB’s vice president of environment and energy, are attending the conference.  They are in Durban as part of the International Chamber of Commerce (ICC) delegation. ICC has long served  as the business focal point in the climate negotiations.

Other groups are in Durban as well, working to ensure business engagement in support of meaningful action to address climate change.  Increasingly prominent in this regard is the Major Economies Business Forum on Energy Security and Climate Change (BizMEF), which consists of major business groups from G20 countries.

BizMEF has just released a series of important papers, with general perspectives on the Durban negotiations, and examining business engagement, the role of technology, establishing a green climate fund, the use of carbon offsets, and competitiveness issues.

Yesterday, Ms. Kennedy published an insightful column on the website GreenBiz that notes the varying expectations of business and the governments represented in Durban, and describes the genesis and work of BizMEF.  She writes that even as business presses for meaningful progress on global measures to address climate change, government delegates are laboring under the burden of precedent-setting decisions, made some two decades ago, to bifurcate climate obligations between developed and developing countries.

“Some countries that were developing countries then, such as China and India, are now growing rapidly and are major economic forces in their own right,” writes Ms. Kennedy.  “If current trends continue in the fastest growing developing country economies, reductions made in developed countries will be cancelled out and overtaken by emissions in the BRICs in coming years.”

The United States and countries including Australia, Canada, Russia and Japan have strongly encouraged a new framework obliging all major economies, whether developed or developing, to take action to reduce greenhouse gas emissions. But, Ms. Kennedy wrote, “as evidenced in the entrenched positions being expressed here, this is prevented by the precedents that do not allow updating to reflect today’s realities.”

This entry was posted in Business In Society, News Stories, Sustainable Development and tagged Energy, Environment.
Posted on December 1, 2011