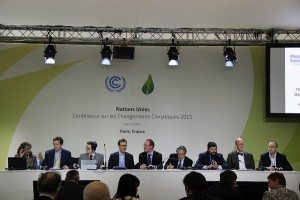 After four years of intensive negotiations, 194 countries concluded a long-term global climate treaty, known as the Paris Agreement, to reduce worldwide greenhouse gas emissions. The two-week meeting, which concluded on December 12, was one of the largest gatherings in the history of the UN Framework Convention on Climate Change (UNFCCC), with 150 heads of state on hand, more than 40,000 registered attendees and unprecedented business involvement. USCIB members and staff, including President and CEO Peter Robinson and Vice President for Energy, Environment and International Engagement Norine Kennedy, were on the ground in Paris to advance USCIB policy priorities, hold several side meetings and presentations on US business climate perspectives and demonstrate business’s stake in a successful outcome.

The Paris Agreement is based on national pledges to reduce greenhouse gas emissions, and sets out an international framework for stocktaking on government actions in several areas, including mitigation, adaptation and technology cooperation. The agreement requires countries to report on progress and calls on them to set progressively more ambitious greenhouse gas reduction targets at five year intervals. There will be many opportunities for the private sector to contribute to this global endeavor, although some specifics regarding the agreement’s implementation still require elaboration.  It sets ambitious long term goals to limit mean temperature rise to 1.5 C, with global peaking and net carbon neutrality in the second half of the century.  It also calls on public and private sources to mobilize a minimum of $100 billion per year to support climate action in developing countries, with that amount to increase after 2020. The Paris Agreement will enter into force when 55 countries making up 55% of global emissions ratify it.

USCIB noted several positive outcomes for business in the Paris Agreement relating to technology innovation, the option to use markets for emissions reductions, and the engagement of business in near term actions and technical inputs.

“Business was seeking flexibility and clarity in this agreement, especially with regard to the possible use of markets at national and international levels,” said USCIB member Nick Campbell (Arkema). “We note that the Paris Agreement does not preclude these options, and the door remains open for carbon markets to evolve among interested countries.”

Prior to COP21, USCIB had strong concerns that some countries would attempt to address intellectual property in the Paris outcome as a barrier to the transfer of green technology. Thanks to sustained advocacy from USCIB and many other business organizations, the Paris Agreement does not reference IP, and underscores the need for enabling frameworks.

“Open trade and strong IP protection  are central enabling conditions for innovation, stimulating investment and disseminating new greener technologies and knowledge,” said Norine Kennedy, USCIB’s vice president for strategic international engagement, energy and environment. “Many governments continue to express interest in engaging with the private sector on climate action, and business will remain involved in the process as countries move to elaborate and implement the agreement.”

Visit our climate homepage for more coverage of COP21.