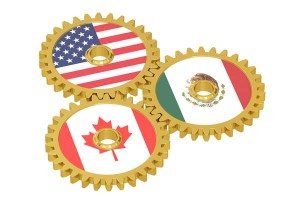 With the Trump administration having served notice of its intention to modernize the North American Free Trade Agreement (NAFTA), USCIB has been advocating for modernization of certain aspects of NAFTA through op-eds, testimonies and meetings. Most recently, USCIB Vice President for Trade and Finance Shaun Donnelly presented USCIB views at the “NAFTA Testimony” hearings held on June 27 at the International Trade Commission (ITC). While held at the ITC, USTR was running the three days of public hearings. Staff from Commerce, State, Treasury, Department of Homeland Security, and Agriculture also sat on the panel and joined in questioning presenters.

Donnelly’s testimony stemmed USCIB’s written submission, which had been developed with member input, focused on NAFTA’s importance to U.S. business and that it should be updated given that it is no longer a “cutting edge” trade agreement. “By all means, update, modernize,” said Donnelly. “But NAFTA does not need a fundamental “root and branch” renegotiation. Give NAFTA a facelift, not a lobotomy,” he emphasized.

“Do the update quickly, seriously, trilaterally, in transparent manner, based on real issues of concern to the U.S. business community not with a political focus on bilateral trade balances or imposing unilateral trade barriers,” Donnelly concluded. “Work with U.S. business, we want to be partners in this important exercise.”