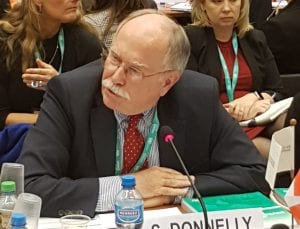 The January-February edition of The Foreign Service Journal, which examines economic diplomacy from many angles—and from all over the world, included a piece from USCIB Vice President Shaun Donnelly, who is a former U.S. Ambassador. Donnelly’s piece “Secretary of State Mike Pompeo has made commercial diplomacy a foreign policy priority. Here’s how to get it right,” was co-authored with Daniel Crocker, a foreign commercial service vice president on the governing board of the American Foreign Service Association.

Donnelly and Crocker outline six critical elements in an effective U.S. economic/commercial diplomacy program, including that top leaders must be personally involved and that American business has a broad agenda in today’s and tomorrow’s global economy.

“As American companies compete to grow, prosper and win, they will need support from the government across a much wider agenda: services, regulatory coherence, license arrangements, international joint ventures, supply chain relationships, inward investment to the United States and outward investment by U.S companies to foreign markets,” Donnelly and Crocker note in the article. “A truly supportive, comprehensive “Team USG” approach to support our companies will have to be able to address that full range of issues.”

Three fundamental realities underline the importance for our country of an effective economic/commercial diplomacy program. First, more than 80 percent of global purchasing power now lies outside the United States, including several large emerging markets with annual gross domestic product (GDP) growth rates that are double our own, or more. Second, it’s an ultra-competitive world; in all key sectors, American companies face broader, deeper and more aggressive foreign competitors, some of whom promote their standards, military platforms and state-subsidized or state-owned companies for both commercial and political gain.