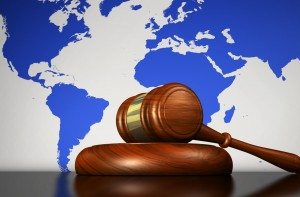 USCIB’s Director for Customs and Trade Facilitation Megan M. Giblin spoke at the spring meeting of the American Bar Association Section of International Law event last Friday, April 28. The event featured more than 60 panels highlighting different aspects of the theme of the conference – “New Leaders, New Laws: 2017 and Beyond.” Giblin spoke on a panel titled “U.S. Measures to Combat Human Trafficking; Responses in the Corporate World,” along with Alice Kipel of U.S. Customs and Border Protection (CBP), Ken Kennedy of U.S. Immigration and Customs Enforcement and Eric Gottwald of the International Human Rights Forum.  The panel was tied to the topic of forced labor and the provisions of the Trade Facilitation and Trade Enforcement Act (TFTFA) of 2016, which repealed the “consumptive demand” clause in 19 U.S.C. §1307.  The focus was on what happens at the ICE and CBP levels on the issue of forced labor, the work industry is carrying out as members are getting caught up in the import prohibition tied to the issuance of Withhold Release Orders (WROs) by the CBP Commissioner, as well as the matter of submissions made by, for example, Civil Society Organizations seeking action under 19 U.S.C. §1307.

Since 15 days after the passage of TFTEA, CBP has not been enforcing the “consumptive demand clause” there have been a series of WROs issued by the CBP Commissioner. All WROs now relate to specific companies in China. The product scope is stevia and its derivatives, peeled garlic as well as a series of chemicals some that can be mined and later manufactured into viscose rayon, for example. No new WROs have been issued since late 2016.

CBP is focused on stopping a specific shipment at time of import, ICE is focused on criminal actions tied to forced labor. What is clear is that the discretions are not the same.

As communicated by then CBP Commissioner Kerlikowski in Congressional testimony in September 2016, we know that there have been shipments stopped by CBP at time of import, which have resulted in either U.S. importers having to re-export the shipments and/or the importers having to provide significant amounts of information to CBP to prove that the specific shipment is clear and free from forced labor. Further, we understand that not only have some shipments been released by CBP for re-export, some shipments have been released for entry into the commerce of the U.S.

The main issue from the customs side is that once a WRO is issued and a there is a submission that links a specific importer, to a specific shipment, to a specific entity listed in a WRO, then U.S. import shipments can and are being detained at the customs border. The shipments are stopped under suspicion that the goods may have had forced labor in their supply chain. “From an industry perspective, there is concern over a shipment being held, transparency over why a shipment has been stopped, timeliness of communications with the importer, brand impact because of a a shipment being detained, not to mention that if information is shared about an importer who’s shipment is stopped there is not always clear communication to parties once an importer has proved  its supply chain is clean and the shipment has been released into the commerce of the U.S.,” said Giblin during her panel. “The regulations are from the 1960’s. Today’s supply chains, global value chains are extremely complex and lots of information must be provided to prove they have a clear supply chain.”

This entry was posted in Accented Stories, Communication Department, Competitiveness and Innovation, Growth, Jobs and Open Markets, News Stories and tagged Customs and Trade Facilitation.
Posted on May 9, 2017