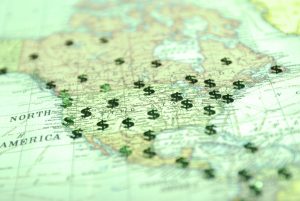 With the next NAFTA negotiating round now set for Mexico City later this month, USCIB Director for Investment, Trade and Financial Services Eva Hampl joined more than 100 representatives from the business and agriculture community last Wednesday for a second NAFTA House Lobby Day. The Lobby Day gave business representatives the opportunity to talk about business concerns and perspectives regarding the ongoing negotiations to modernize NAFTA and to increase support on the leadup to the next round of negotiations, scheduled for February 26 to March 6.

Hampl led one of the groups on the Hill, which included representatives from other associations and companies from the business and agriculture community. “The diversity of sectors represented was extremely helpful in getting our message across,” said Hampl. “Our group alone met with 9 offices throughout the day, receiving generally positive feedback about supporting our issues and concerns, including potential interest in signing on to a House NAFTA letter.”

Hampl will be traveling to Mexico for part of the next round at the end of February.