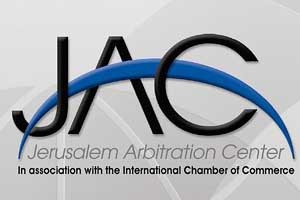 Israeli and Palestinian business leaders joined the leadership of the International Chamber of Commerce in Jerusalem today to inaugurate the first dedicated Israeli-Palestinian center for the resolution of commercial disputes between businesses in the Palestinian territories and Israel.

John Beechey, president of the ICC International Court of Arbitration®, joined Andrea Carlevaris, the Court’s secretary general and ICC Secretary General Jean-Guy Carrier in Jerusalem to witness the historic launch of the Jerusalem Arbitration Center (JAC) and the signing of a memorandum of engagement.

“We are hopeful the $4 billion in annual trade between Palestinians and Israelis will expand significantly now that there is a mechanism in place to bring swift and fair resolution to commercial disputes and create greater certainty for the business community,” said Terry McGraw, chairman of McGraw Hill Financial [now S&P Global] and chairman of both ICC and USCIB. “By strengthening commercial relations and improving economic cooperation between the Palestinian and Israeli people there are new opportunities to attract investments and enhance long-term economic growth in the region.”

The opening of the center is the first measure taken since the 1993 Oslo Accords to establish an internationally accepted arbitration mechanism to resolve commercial disputes between Israel and the Palestinian territories. ICC has been instrumental in establishing the JAC, a joint venture agreement between ICC Palestine, which is based in the West Bank, and ICC Israel. The center will serve as a wholly independent provider of dispute resolution services for the settlement of commercial disputes between Palestinian and Israeli businesses using specific rules drafted for the JAC based on the ICC Rules of Arbitration.

“The Jerusalem Arbitration Center is a truly neutral and independent forum, the purpose of which is to provide dispute resolution services in which parties from Israel and Palestine can have real confidence,” stated Beechey.The International Court of Arbitration® will continue to offer active support to the center, notably in the form of on-going training and guidance on issues such as the criteria for selecting arbitrators and establishing jurisdiction.”