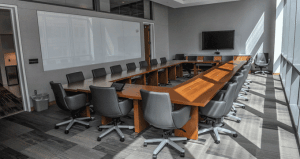 The International Chamber of Commerce and the Atlanta Center for International Arbitration and Mediation – a state-of-the-art hearing and conference facility for international dispute resolution affiliated with the Georgia State University College of Law – have announced efforts to enhance cooperation under the terms of a memorandum of understanding (MOU) entered into January 15.

The collaboration is set to benefit the international arbitration community and reinforce the commitment of ICC’s International Court of Arbitration to North America, the largest constituency of ICC Arbitration users.

The MOU is the latest step by the Court to bolster its presence in the United States following the establishment of a case management team in New York operating under the corporate name of SICANA Inc.

“US parties rank first as users of ICC Arbitration and other ICC dispute resolution services,” said Andrea Carlevaris, secretary general of the ICC International Court of Arbitration. “The opening of an office administering ICC arbitrations in New York City in 2013 is a tangible sign of our commitment to North America and has boosted our services in the country. The MOU with the Atlanta Center is another step in the same direction for us to raise our profile in the region.”

Shelby Grubbs, the Atlanta Center’s executive director, noted: “We are thrilled to be aligned with the ICC, one of the world’s oldest and most prestigious international institutions offering arbitration and alternative dispute resolution services. Atlanta is the commercial capital of the Southeastern U.S., a region with a $3.3 trillion economy. With our location and great logistics, we are confident that we can help the ICC expand in North America.”

Celebrating its 90th anniversary in 2013, the ICC International Court of Arbitration is one of the oldest and most respected institutions for international commercial arbitration, an appealing alternative to litigation for companies and states. In addition to the Court’s wealth of expertise, partnerships with respected partners such as the Atlanta Center demonstrate ICC’s commitment to keep pace with contemporary interests and concerns of dispute resolution service users around the world.

The Atlanta Center for International Arbitration and Mediation is located on the fourth floor of the Georgia State University College of Law at 85 Park Place NE, Atlanta, GA 30303. For additional information on the center go to: http://atlciam.org/

This entry was posted in Arbitration, ICC. Bookmark the permalink.
Modified on November 13, 2017
Posted on January 19, 2016