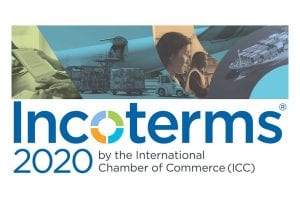 Paris and New York, April 22, 2019 – The International Chamber of Commerce (ICC) is preparing for the publication of Incoterms® 2020, an update of the renowned regulations that define the responsibilities of buyers and sellers operating in the international trade system, according to ICC’s American national committee, the United States Council for International Business (USCIB).

Facilitating trillions of dollars in global trade each year, the “international commercial terms,” or Incoterms® rules, are a commonly accepted set of definitions and rules governing commercial trade activity.

“The revised Incoterms® rules will have a direct impact on traders throughout the United States and the world,” according to USCIB President and CEO Peter Robinson. “It will be important for everyone involved in cross-border business to familiarize themselves with the changes. We will be working to educate our members and the business community at large on the most important changes.”

Nearly a century ago, following a series of studies conducted in the 1920s, the Paris-based ICC concluded that there was a need for the creation of a common protocol for importers and exporters everywhere. The first set of Incoterms® rules was published by ICC in 1936. Since then, ICC has periodically revised the Incoterms® rules to reflect changes in the international trade system.

For the past decade, Incoterms® 2010 has provided critical guidance to importers, exporters, lawyers, transporters and insurers across the world. ICC is preparing for the official release of Incoterms® 2020 later this year.

USCIB said that, joining with ICC chapters around the world, it plans to roll out training programs and seminars alongside the worldwide publication of the new terms.

“Now more than ever, participants in the global trading system require guidance and clarity,” Robinson said. “With the emergence of new technologies, government policies, and environmental regulations, Incoterms® 2020 will provide a common framework for the future of trade.”

USCIB has established a central information page on its website for all the latest developments surrounding the introduction of Incoterms® 2020. Go to uscib.org/about-incoterms-2020 for more information.

About USCIB:
USCIB promotes open markets, competitiveness and innovation, sustainable development and corporate responsibility, supported by international engagement and regulatory coherence. Its members include U.S.-based global companies and professional services firms from every sector of our economy, with operations in every region of the world, generating $5 trillion in annual revenues and employing over 11 million people worldwide. As the U.S. affiliate of several leading international business organizations, including ICC, USCIB provides business views to policy makers and regulatory authorities worldwide, and works to facilitate international trade and investment. More information is available at www.uscib.org.