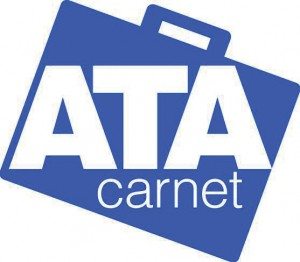 New York, N.Y., January 10, 2017 – To date, the Dow Jones Industrial Average has only flirted with the elusive 20,000-point milestone. But another economic indicator – one that tends to forecast trends in U.S. exports – recently blew past the 20K mark and shows signs of continued growth. American companies and business executives used more than 20,000 ATA Carnets for the temporary export of various types of goods in 2016, according to the United States Council for International Business (USCIB), which administers and guarantees ATA Carnets in the United States.

The ATA Carnet, also known as the “merchandise passport,” is an international customs document honored by customs authorities in some 75 countries, which helps companies expedite temporary duty-free and tax-free import of goods for professional equipment, commercial samples and items for display at exhibitions and fairs. The worldwide ATA Carnet system is overseen by the World Customs Organization and the International Chamber of Commerce (ICC), for which USCIB serves as the American national committee.

“The 20,000 mark has been a longstanding goal for the ATA Carnet service,” said USCIB President and CEO Peter M. Robinson. “It was achieved following two very impressive growth years spearheaded by our Service Providers, Roanoke Trade and Boomerang Carnets. We believe that this milestone is a positive sign for continued growth in U.S. exports, since ATA Carnet usage by American firms often presages increased sales overseas.”

The ATA Carnet system has expanded in recent years, with Brazil joining last June as the country got set to host the Summer Olympics. Robinson said there are hopes that additional countries in Latin America will soon participate. Mexico and Chile have honored ATA Carnets for several years. USCIB plays an active role in the worldwide administration of the global system by virtue of its role as the U.S. affiliate of ICC. The United States is the third-largest user of ATA Carnets, following Germany and Switzerland.

Find out more about the services offered by USCIB to facilitate cross-border trade and investment at www.uscib.org.

About USCIB:
USCIB promotes open markets, competitiveness and innovation, sustainable development and corporate responsibility, supported by international engagement and regulatory coherence. Its members include U.S.-based global companies and professional services firms from every sector of our economy, with operations in every region of the world. With a unique global network encompassing leading international business organizations, including ICC, USCIB provides business views to policy makers and regulatory authorities worldwide, and works to facilitate international trade and investment.