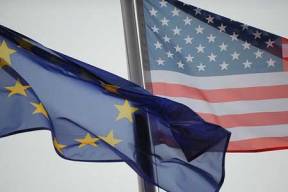 Washington, D.C., April 10, 2013 – An array of U.S. companies and business groups launched the Business Coalition for Transatlantic Trade today at an event on Capitol Hill, according to the United States Council for International Business (USCIB), which serves on the coalition’s steering group.

Coalition members joined with key members of Congress, senior administration officials and representatives of the European Parliament to underscore their strong support for the Transatlantic Trade and Investment Partnership (TTIP), which President Obama and European leaders proposed in February.

“This new coalition will strengthen the voice of business in the TTIP negotiations, promoting a comprehensive and high-standards agreement,” said USCIB President Peter M. Robinson. “A deeper U.S.-EU commercial relationship will provide benefits on both sides of the Atlantic, including economic growth and job creation.”

Robinson said USCIB members were optimistic that regulatory hurdles could be effectively addressed in the context of a comprehensive trade and investment pact. “We want an ambitious agreement that can meet the needs of 21st-century business,” he said.

Coalition members will coordinate advocacy efforts and provide detailed input to negotiators from both sides of the Atlantic, and will serve as an information resource on important regulatory and investment issues as talks proceed.

USCIB promotes open markets, competitiveness and innovation, sustainable development and corporate responsibility, supported by international engagement and regulatory coherence. Its members include U.S.-based global companies and professional services firms from every sector of our economy, with operations in every region of the world. With a unique global network encompassing leading international business organizations, USCIB provides business views to policy makers and regulatory authorities worldwide, and works to facilitate international trade and investment. More at www.uscib.org.

This entry was posted in Communication Department, Press Release. Bookmark the permalink.
Modified on May 12, 2015
Posted on April 10, 2013