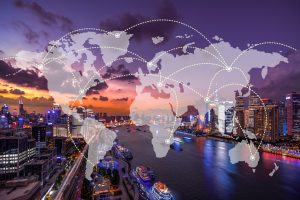 The much-anticipated Organization for Economic Cooperation and Development (OECD) report on the World Trade Organization (WTO) moratorium on customs duties on electronic transmissions was de-classified on November 4.

According to USCIB Senior Vice President for Policy and Government Affairs Rob Mulligan, the report, “Electronic transmissions and international trade – Shedding new light on the moratorium debate,” concludes that revenue implications of lifting the Moratorium are likely to be relatively small and would come at the expense of more significant gains in consumer welfare (estimated at 940 million USD) and export competitiveness.

The Moratorium, which has been in place since 1998 and has been continuously extended every couple of years since then, is once again due to expire at the end of 2019. Keeping the Moratorium is crucial for business, and USCIB has been actively engaged in pushing back against the opponents of extending the Moratorium with the ultimate goal of making it permanent.

The OECD report also notes that the highest estimated share of opportunity cost in terms of foregone revenue is in digitizable goods, which is low, at 1.2% of total trade. This will likely remain low even with the advent of technologies such as 3D printing, which are unlikely to have far-reaching implications on trade in the near term.

The report noted that tariffs also come with costs. Tariffs are associated with lower output and lower productivity and their burden falls mainly on domestic consumers, not foreign firms. Tariffs are also an unstable source of revenue. Alternatives exist in the form of non-discriminatory value added taxes or goods and services taxes.

The WTO General Council meeting, set for December 9-11, will provide a final opportunity to extend the Moratorium.