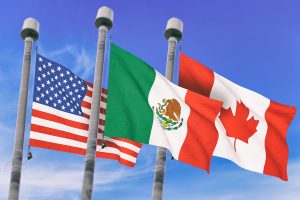 Following previous successful NAFTA Senate Lobby Days, USCIB once again participated last week, joining more than 100 representatives from the agriculture and business community to talk about private sector concerns and perspectives regarding the ongoing negotiations to modernize NAFTA. The Senate Lobby Day, as in the past, was coordinated as a larger Coalition effort by the U.S. Chamber of Commerce.

“The purpose of this day was to increase support in light of the high-level talks among the NAFTA countries currently taking place in DC,” noted Eva Hampl, USCIB director for investment, trade and financial services. “There is concern in the business community about the Administration’s alleged push to conclude an agreement on an accelerated timeline.”

Hampl led one of the groups that went up to the Hill last week, where she met with several Republican and Democratic Senate offices throughout the day.

“While the various offices are certainly focused on NAFTA, they do not appear to have a definite action plan on what to do in the event of the potential negative scenarios that may take place, such as withdrawal from NAFTA 1.0 or an inadequate NAFTA 2.0.,” said Hampl.  “Also, while the Committee appears to get briefings from the Administration when they request it, the remainder of the Senators are not being briefed in a way that should be expected under TPA, given that the agreement is allegedly near conclusion.”