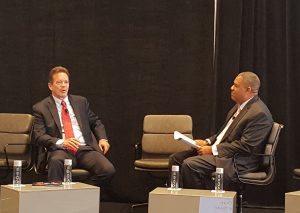 “This is a very perilous time for trade,” noted Robinson. “In the past, no matter what other countries were doing or saying, we could always count on the U.S. and UK to stand up for open markets. That’s no longer the case. We could be at a point where anti-trade forces can effectively flip the script.”

On trade with Asia, Robinson discussed the importance of an alternative approach in place of the Trans-Pacific Partnership (TPP). “TPP was really a top-notch agreement in my view,” he said. “But we walked away from it for political reasons. And potential FTA partners like the UK and Japan would be likely to take a very hard line in any talks with us.”

Robinson also discussed innovation and USCIB’s work on the digital economy, alongside the OECD, that the OECD takes into account the views of business and to shape policy that would not stifle innovation. Robinson also touched upon the International Chamber of Commerce’s new status at the UN General Assembly which will enable USCIB to push for expanded trade, access to trade finance and sensible approaches to technological innovation and regulation, as well as promoting business involvement in the UN Sustainable Development Goals, which encompass financial inclusion.