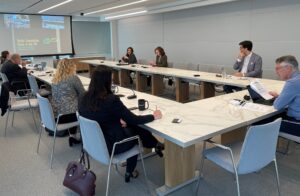 The meeting featured a keynote presentation on a history of cases brought before the International Trade Commission (ITC) relating to unfair competition under Section 337, according to USCIB Director for Investment, Trade and China Alice Slayton Clark. While Section 337 protects U.S. companies from “unfair methods of competition and unfair acts” related to the importation of articles made by foreign companies, it was considered for years as inappropriate for antitrust litigation. Since the law was amended in 1974 to give the ITC authority to issue cease and desist orders, however, it is now being used more for antitrust filings. Deanna Tanner Okun, former ITC chair and managing partner at AMS Trade LLP, and Lauren Peterson, partner AMS Trade LLP, described how the law developed into the antitrust tool it is today, including details on key cases filed and their outcomes.

Of significance, USCIB member Taylor Owings of Baker Botts reviewed USCIB comments filed last week with the Federal Trade Commission (FTC) and the Department of Justice (DOJ) Antitrust Division on modernizing enforcement guidelines for mergers. USCIB Competition Committee Vice Chair Jennifer Patterson provided updates on details of antitrust legislation moving through the U.S. Congress. USCIB plans to facilitate a member briefing with congressional staff on antitrust legislation as it advances in the months ahead. Finally, USCIB member John Taladay of Baker Botts proposed the creation of a new ICC task force to develop principles for RFIs (requests for information) for non-targeted stakeholders because they have become overly burdensome.

Regarding the ICC Competition Commission workstreams, Compliance and Advocacy Chair Anne Riley reported that ICC is working to expand credit for compliance programs in other jurisdictions across the globe. Riley also reported that late last year, the ICC filed comments regarding the French Competition Authority’s (FCA) new guidance on antitrust compliance programs, highlighting the importance of compliance and providing benchmarks on the objectives, the definition, and the implementation of these programs. In addition, Member of the ICC Merger Control Regimes Task Force (TF) Alex Nourry reported that the TF is currently working on comments to the European Commission on a proposed revision of competition rules regarding horizontal cooperation agreements. USCIB members were solicited and provided inputs. The ICC hopes the revision will ultimately yield better clarity and legal certainty for these agreements.