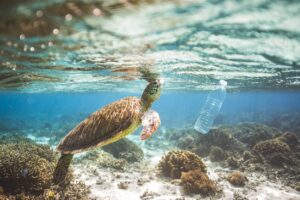 At this meeting, which also commemorated the 50th anniversary of UNEP’s founding, government delegations reached agreement on the resolution, End Plastic Pollution: Towards an International Legally Binding Instrument (LBI) which sets into motion an intergovernmental negotiating committee (INC) to develop the LBI by end of 2024. In addition, UNEA agreed to establish a new Science-Policy Panel on Chemicals, Waste and Pollution, which will be developed in negotiations over the next two years, to serve as a trusted source of consensus in these areas, much in the same way that the Intergovernmental Panel on Climate Change (IPCC) is a recognized source of scientific consensus on climate change.

USCIB conducted a live briefing for members from Nairobi on March 2 to pass on the most up-to-date developments, focusing on outcomes relevant to business. American Chemistry Council (ACC) Senior Director, Global Plastics Policy Stewart Harris provided insights on the business opportunities and challenges ahead in the development of a legally binding instrument to address global plastic pollution. Harris and Kennedy referenced the USCIB Letter to the Administration, which set out USCIB member priorities to the State Department and EPA.

During the briefing, Harris characterized the plastics pollution negotiating mandate as a good outcome for business and industry, enabling business leadership initiatives while also assessing effectiveness and supply chain impacts of proposed actions. Moreover, the resolutions prioritize flexibility and recognize the need to engage business in the treaty’s development. Kennedy also pointed out critical outcomes in the areas of circular economy and sustainable infrastructure, among others.

On March 10, USCIB’s Environment Committee will convene a meeting which will include a more detailed briefing on the outcomes of UNEA 5.2 and their implications for U.S. Business.