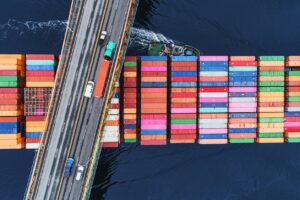 This year’s B20 Summit, held November 13-14, embraced the theme of ‘Advancing Innovative, Inclusive and Collaborative Growth’ in support of the G20 theme of ‘Recover Together, Recover Stronger’. The B20 Summit brought together world business leaders representing leading multinational corporations. In the lead up to the B20 Summit, USCIB policy experts worked closely with USCIB members through various B20 Task Forces, such as those focused on digitalization, trade and investment, integrity and compliance as well as illicit trade and illicit finance.

USCIB Vice President for ICT Policy Barbara Wanner participated on the B20 Indonesia Digitalization Task Force on behalf of USCIB members. Wanner provided inputs to the Digitalization Task Force report aimed at ensuring that the substance aligned with USCIB contributions to the OECD digital work and the UN Global Digital Compact. According to Wanner, the focus of USCIB substantive inputs – which largely were taken on board by B20 Indonesia – were aimed at carrying through the themes of “data free flows with trust,” opposition to data localization requirements, risk-based and interoperable approaches to digital security, and the importance of multistakeholder participation in global digital consultations.

Working with David M. Luna, chair of the USCIB Anti-Illicit Trade Committee, USCIB submitted comments pertaining to Policy Recommendation 3 to foster agility in counteract measures to combat money laundering/terrorist financing risk and Policy Action 3.1 to refocus on money laundering/terrorist financing risk factors identification. USCIB’s submission on language recognizing the “link between the sustainability agenda, illicit trade/illicit finance, and financial crime” was adopted by the task force and is included in the final policy paper. Additionally, commentary submitted by USCIB to include language on environmental crime and trade-based money laundering is also reflected in the final policy paper.