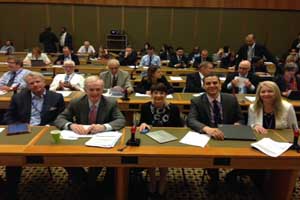 On June 9, the ILO Forced Labor Committee successfully completed a new recommendation and protocol, which will supplement the 1930 Forced Labor Convention. The new protocol will address gaps on human trafficking.

Speaking on Wednesday during the Forced Labor Committee discussions, Employer Spokesperson Ed Potter (Coca-Cola) told attendees that the committee’s work is a “historic opportunity for the business community to put its stamp on human rights.”

At the ILO Conference, USCIB’s Goldberg represented the IOE Management Board and stood for re-election to the Governing Body of the ILO and reappointment as an IOE regional vice president. She also participated in the International Labor Conference Committee on Employment, which focused on setting ILO employment priorities. Goldberg was re-elected to the governing body with the highest number of votes among all candidates standing. A full list of recently elected ILO Governing Body members can be found on the IOE website. They will serve from 2014 to 2017.

In a disappointing move over the weekend, the Workers’ Group announced it would block draft conclusions in the Committee on the Application of Standards. It blocked proceedings because the Workers’ Group refused to accept any language that indicates disagreement over including the right to strike in this convention.

The IOE website reports: “Employers find it very difficult to understand why the Workers refuse to have acknowledged in the conclusions perfectly legitimate differing points of view – a normal practice in any tripartite discussion.”

At a June 4 meeting of the ILO Employers’ Group, Guy Ryder, the director general of the ILO, announced he would deliver an “honest appraisal” of the ILO reform to the group. He noted positive developments, with the ILO “beginning to work in new, different and better ways.” He also acknowledged Employers’ Group’s role in bringing beneficial reform to the ILO Governing Body.

USCIB Weighs In on Transition to Formal Economy

During the ILO Conference, USCIB’s Meyerstein participated in the Committee on the Transition from the Informal to the Formal Economy. The committee serves as a two-year standard setting process that will lead to a recommendation from the ILO to member states on how to manage this transition, which affects a huge proportion of the global economy in both developed and developing countries.

In consultation with a global group of national employer representatives, USCIB is advocating for a general framework that recognizes the diversity of national experiences and recommends gradual and progressive transition strategies that are built upon establishing legal relationships between employers, employees and the state.  Establishing these legal relationships is the necessary precursor to expanding national capacity to implement and enforce ILO labor standards and social protections.

Meyerstein noted that transition strategies should remove barriers to entry into the formal economy presented by over-burdensome regulatory frameworks, present appropriate support and incentives to make transition easy for enterprises and continue to provide them an enabling environment for sustainable growth.

This entry was posted in Business In Society and tagged Corporate Responsibility and Labor Affairs.
Modified on May 8, 2017
Posted on June 9, 2014