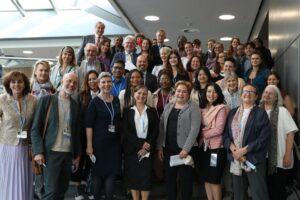 The United Nations concluded two weeks of preparatory meetings in advance of the next Climate Summit, known as COP27, which will be held November 8-18 in Sharm El Sheikh, Egypt.  As the first official negotiations since Glasgow in 2021, this meeting brought all UN member states, UN bodies, business and other groups to discuss urgently accelerating implementation of the Paris Agreement.

According to USCIB Senior Vice President for Policy and Global Strategy Norine Kennedy, who was on the ground representing U.S. business, the intense session included special presentations of the most recent scientific findings of the Intergovernmental Panel on Climate Change (IPCC), and technical roundtables under the “global stock take,” which will assess the need for and degree of additional greenhouse gas emissions reductions required to keep global temperature rise well below 2 degrees C. The session also took up further development of “Article 6” measures to allow carbon trading and offsets under the Paris Agreement.

In addition, new attention is now being directed toward the private sector with respect to voluntary pledges and initiatives, such as those announced last year at the Glasgow Summit. The UN Secretary General and the UNFCCC High Level Champions have each recently announced new initiatives to review such voluntary announcements to ensure they are being put into practice.

At a meeting with members of the U.S. Government delegation at Bonn, Co-Chair of the USCIB Environment Committee Justin Perrettson (Novozymes) called out the “importance of private sector innovation to tackle the inter-linked challenges of climate change, food security and energy transitions,” and went on to highlight the need to include business in the implementation phase of the Convention.

The most contentious issues in Bonn concerned mobilizing financial resources for adaptation to impacts of climate change, and the establishment of a fund to provide compensation for loss and damage caused by climate change.

As the host of COP27, Egypt is expected to place particular emphasis on food and water security, just transition, and adaptation for resilience. The International Chamber of Commerce (ICC), serving as the official focal point for business in the UNFCCC, has already begun dialogue with Egyptian government authorities on key topics relating to carbon markets, the role of SMEs and ways to further increase ambition across private and public sectors.