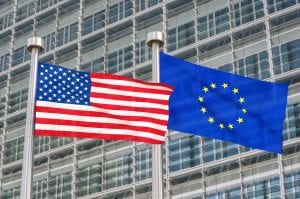 The EU countries together make up the number one export market for the U.S., with goods exports to the EU in 2016 totaling $269.6 billion, constituting 18.6% of total U.S. goods exports.

USCIB submitted negotiation objectives for a U.S.-EU Trade Agreement to the United States Trade Representative (USTR) on December 11. The submission was filed in response to USTR’s request for comments and emphasized the importance of a comprehensive negotiation, covering not only market access for goods, but also critical services issues.

The USTR request for comments follows the Trump administration’s announcement to Congress on October 16 of its intention to initiate negotiations on a U.S.-EU Trade Agreement. USCIB supports negotiation of a comprehensive trade agreement with the EU as part of a broader strategy to open international markets for U.S. companies and remove barriers and unfair trade practices in support of U.S. jobs. USCIB priority issues for negotiation of a U.S.-EU agreement include investment, customs and trade facilitation, express delivery services, improved regulatory cohesion, digital trade, intellectual property, government procurement and SOEs, and financial services.

“The EU is an important trade partner for the United States,” said USCIB Senior Director for Investment, Trade and Financial Services Eva Hampl. “USCIB members see the value of common approaches toward establishing a more integrated and barrier-free transatlantic marketplace. Regulatory discrimination and differentiation across the Atlantic is an increasingly frustrating obstacle to trade, investment and the ability to conduct business.”

USCIB supported the negotiations of a comprehensive, high-standard U.S.-EU trade agreement, the Transatlantic Trade and Investment Partnership (TTIP), which commenced in 2013 and aspired to eliminate tariff and no-tariff barriers on goods and services trade between the U.S. and the EU. These negotiations were halted by the current administration, but the range of issues that were on the table at the time, ranging from strong investment protections, to increased trade facilitation, and regulatory coherence, continue to be of great importance to our members.

The EU countries together make up the number one export market for the United States, with goods exports to the EU in 2016 totaling $269.6 billion, constituting 18.6% of total U.S. goods exports. U.S. goods and services trade with the EU totaled nearly $1.1 trillion in 2016, with exports totaling $501 billion. The United States also has a surplus in services trade with the EU, totaling $55 billion in 2016. According to Hampl, a successful trade agreement with the EU should cover not just market access for goods, but also address important services issues.