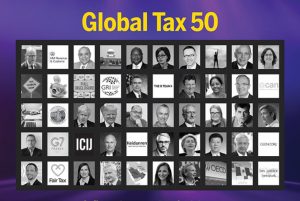 The International Tax Review (ITR) publication released its annual ‘Global Tax 50’ in December, featuring a rundown of the most influential individuals, organizations, geopolitical events and trends in the tax world. Among the Global Tax 50 is USCIB Vice President for Taxation Policy Carol Doran Klein.

According to ITR, “voices like Doran Klein will be crucial” in 2020.

In her feature, Doran Klein suggested that “the biggest challenge of 2020 will be getting a political deal on digital tax that holds together the unified approach.”

This ninth edition of the ITR’s Global 50 represents the choices of the ITR editorial team, who decided who or what they thought has had the biggest impact on taxation during the past twelve months. Breaking down the entire 50 individually according to the impact they made would require too granular an approach, so the magazine list is ordered alphabetically.