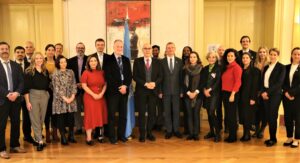 The Forum provided a platform for historically underrepresented groups to voice their concerns and for business to reiterate its commitment for advancing human rights. However according to USCIB Policy Associate Jose Arroyo, business representation during the formal sessions was unfortunately limited, making the side events and extra meetings, which were organized by USCIB and the International Organization of Employers (IOE), all the more important.

“USCIB and IOE expressed to the UN Working Group the need to engage business in the discussions and highlighted our common goals to address informality, close the gap between labor practice and labor law and encourage more decisive action from States in enforcing existing regulations,” said Arroyo.

“While notable discussions were held during the Forum, the absence of a business perspective across several panels was palpable,” added Arroyo. This message, as well as the fact that business should be regarded as a partner in the promotion and protection of human rights on the ground, was conveyed directly to the UN High Commissioner for Human Rights, in a private meeting organized by IOE.

“In our messaging to the High Commissioner, the business community clearly expressed our common goal to promote the Human Rights approach and reiterated our strong commitment to do the right thing,” concluded Arroyo.

In the USCIB-organized meeting with the U.S. Ambassador to the Human Rights Council, members had the opportunity to discuss their concerns regarding the draft UN Binding Treaty on Business and Human Rights and upcoming legislation in Europe, as well as to describe their due diligence efforts in the context of the UN Guiding Principles.

Jose Arroyo manages corporate responsibility, human rights, and labor affairs policy. Arroyo started his career in 2011 as a policy and financial auditor for the Government of Costa Rica and later, he transitioned to the Foreign Service. In 2013, he was appointed as Consul of Costa Rica in New York, where he worked in implementing foreign policy, with a particular focus on sustainability and immigrant protection. As a diplomat, Arroyo tracked policy and legislation developments and fostered cooperation between Costa Rica and the U.S. Government, state officials, multinational organizations, and the private sector. After leaving the Consulate, Arroyo became a consultant with UNEP, advising on economic growth under a decarbonization strategy. He brings expertise in international affairs, project management, and relationship building.
Read More