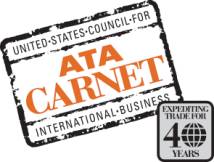 Building on four decades of U.S. growth, the Carnet service is broadening awareness and use among smaller companies of “merchandise passports,” which enable exporters and global companies to avoid paying duties and taxes on goods taken abroad temporarily for trade shows, product demonstrations and as professional equipment.

The Carnet system celebrated its 40th anniversary in the United States in 2009.  According to Cynthia Duncan, USCIB’s senior vice president for Carnet operations, the goal in the current small-business push is to help create jobs by getting exports growing again.  “Trade is essential for our economy to prosper, and ATA Carnets can make it easier for smaller companies to make inroads into overseas markets,” she observed.

“Right now, U.S. companies aren’t anywhere near maximizing their export potential,” Mr. Locke said.  “Ninety-seven percent of U.S. exporters are small- and medium-size businesses, but they only account for 30 percent of export value.  Meanwhile, of all the American businesses that export, 58 percent export to only one country.  We can do a lot better.  We’re looking forward to working with the Council to help educate U.S. companies about the ATA Carnet system.”

In September, building on an agreement signed earlier this year with the U.S. Department of Commerce, Amanda Barlow, USCIB’s Carnet development manager, provided training in the use of Carnets to the department’s Trade Information Center.  In early November, ATA Carnet exhibited at the 2009 National District Export Council conference in Washington, D.C., where information sessions and events addressed the importance of lifting trade sanctions for American businesses to thrive.

Ms. Barlow continued outreach and training for U.S. Export Assistance Centers around the country. At the Northern Kentucky International Trade Association’s Trade Education seminar, she spoke about how Carnets can save American businesses time and money when implementing exporting or growing their current export market share.

This entry was posted in ATA Carnet, Trade Services. Bookmark the permalink.
Modified on August 24, 2018
Posted on December 8, 2009